I was lucky to get my hands on an iPod Touch. The first thing I did was to install SSH, gcc, subversion, vim, gdb et voila! Checked out the source of the Eiffel Software runtime. Tonight, I'll compile the runtime and run our regression test suite on it to make sure everything works properly.

When this is done, I'll look at how to use Eiffel for iPhone/iPod Touch development. Anyone interested in wrapping the iPhone API, please let me know.

Update 2009-05-15: Last night I was able to compile the runtime and run my first "Hello World!" application. I'll post a screenshot soon. 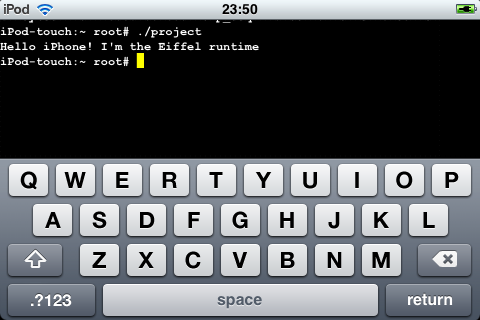 Update 2009-05-22: I've ran the regression test suite, it took a long time (at least 30h+), the iPod crashed 6 times, automatically rebooted 5 times and froze once. The results are good although not all tests were executed because of the crashes which caused some tests to be skipped (10% of the tests) because I was not always next to the iPod to verify that everything was progressing well. I'll now start building my first UI application.