Caution: Turn this option on only if you have advanced knowledge of the garbage collector internals, because using this syntax in some situations could lead to bugs that are very hard to trace.

Note: On Windows, the dynamic run-time is available only if you compile with the Microsoft Visual compiler.

The standard naming conventions for .NET and Eiffel are different. To accommodate this difference Eiffel Studio provides a number of options to the developer, allowing for consistent naming of classes and features within and between .NET systems. To illustrate this we shall consider a system using the EiffelBase library and focus on the CURSOR class. The base cluster is included in the project settings Cluster tab as shown below, where $ISE_EIFFEL is the environment variable pointing to the location of Eiffel on your hard disk.

The CURSOR class is located at '$ISE_EIFFEL\library\base\structures\cursors'. 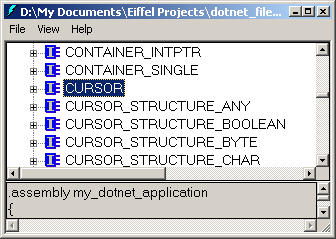 If 'Use recursive cluster names' is true then the full cluster name is pre-pended to the class name, so it thus becomes 'base.structures.cursors.CURSOR'. This table shows how the class name generation is affected by the naming options using the CURSOR class found in '$ISE_EIFFEL\library\base\structures\cursors' as an example.