Select the information you need and formulate your query

The final screen of the wizard lets you select the information you want to be displayed in the profile query window.

Select the information you need

Check or uncheck any of the check buttons in Output switches to select the columns you want to be displayed. Each switch turns on or off the corresponding column output. You should toggle columns on or off depending on what you would like to see in the result of the computation. Here are the explanations of each switch:

Check or uncheck any of the check buttons in the Language type to select the type of features you want to be displayed. If you select only one language, the query result will not contain any information about routines written in the other language. The default is Eiffel only.

When running a query, you are able to type a complete query. After pressing the Next button, a new window will be displayed to show the result of the query. The total query can be either a single one or a set of sub-queries separated by one of the two operators 'or' or 'and'.

Each sub-query must have the following syntax 'attribute operator value' where: 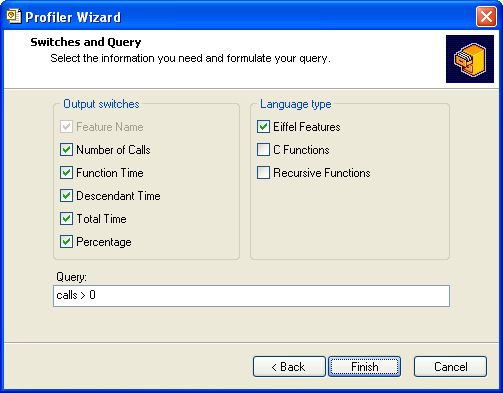 Clicking Next will open the Profile query window and display the results of the formulated query.

See Also:
How to profile a system