The Builder window provides a view of the objects in your system, in which the objects may be manipulated.

This window may either be shown or hidden (default). To change between these two states, click

on the main toolbar, or select Show/Hide builder window from the View menu. 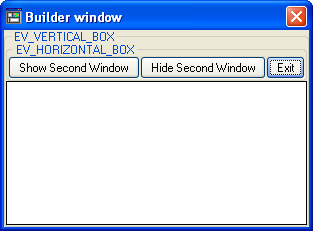 The content of this window is a representation of the objects you have defined in your project. Each object is represented by the EiffelVision 2 control matching its type. For example, an object representing an will be displayed in here using an . As this view provides direct access to the objects ( Pick any of the controls in this window), it enables you to build your interface within a view which provides rich visual feedback. Because this window is just a view of the objects, it will be always synchronized with the layout constructor . This means you can re-parent objects , using the pick and drop transport method, seamlessly between the two views.

Although the builder window attempts to show you the interface you are developing, it is not a completely accurate representation (Unlike the display window ). The main difference is that all objects representing descendants of EV_CONTAINER are parented in a frame. This was implemented so that you would be able to easily manipulate the containers.

Imagine that this was not the case, and each container object was just represented by an EiffelVision 2 object matching its type. Because these containers have no visible screen space when filled with children, manipulation of them would have been difficult, and the functionality of this view would be compromised.

In the screenshot above, you can see that there are two objects representing containers in your project, an , and an (Excluding the object represented by this window).

The properties of the objects in your system are always reflected in this window, with a few exceptions: