Pick-and-Drop is a unique user-interface action that permits a user to request an action be performed on a specified object. It is a more-ergonomic alternative to the typical drag-and-drop or "select-and-click" user operations found in most modern graphical user interfaces. Users of EiffelStudio have come to value Pick-and-Drop as both intuitive, and easier on the wrist and fingers with long-term use.

Pick-and-Drop uses the metaphor of pebbles and holes. The typical method of doing a pick-and-drop is that the end user selects the object to receive an action with a single right-click of the mouse. At that point, the mouse arrow turns into a "pebble" connected to the "point of picking" via a visible "band". This "pebble" is often a symbol representing the type of object that was "picked". In the case of the screen-shot below, it is a blue ellipse: the "pebble" symbol for a class. The "pebble" may then be dropped into any compatible "hole" (drop target—a widget configured to accept "pebbles" of this type). Such "receiving" widgets are often tool-bar buttons or editing areas (or in the case of the screen-shot above, the editor "tab" bar), but can be any widget that inherits from EV_PICK_AND_DROPABLE and is properly configured. The user then can either "drop the pebble into the hole" with a second right-click (on the receiving object), or may cancel the operation by single-clicking the left mouse button. 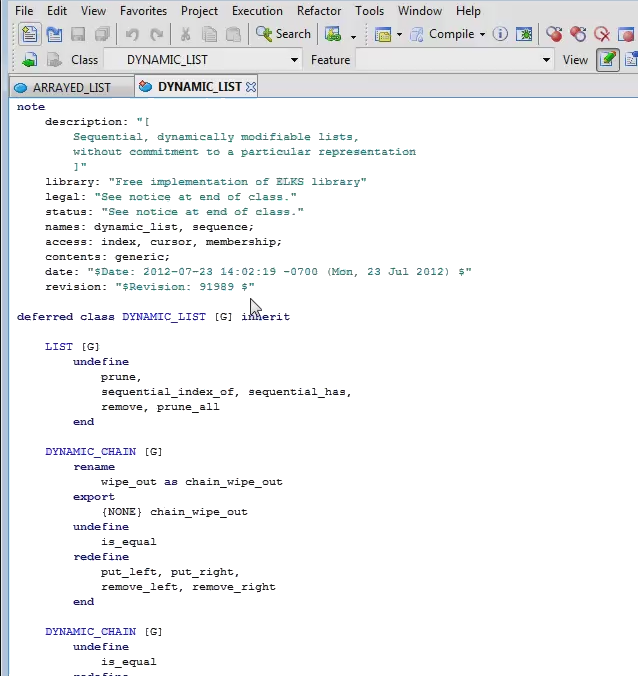 Because the Pick-and-Drop operation has been so popular, classes have been added to the EiffelVision 2 library to make implementing this user interface very easy.

From a technical viewpoint, Pick-and-Drop is a mechanism which allows data to be transported from a source object to a target. Any EiffelVision 2 object inheriting from EV_PICK_AND_DROPABLE can be used to transport or receive data.

The two necessary components for a Pick-and-Drop operation are a source and a target, both of which must conform to EV_PICK_AND_DROPABLE. The data that is to be transported is known as a pebble.

The following steps need to be undertaken to set up a simple pick and drop:

A simple example of this is demonstrated here: button1.set_pebble ("A PND transport has occured%N") button2.drop_actions.extend (agent print (?))

Note: Any type of object can be used as the pebble. When a transport completes, the pebble that was transported is passed as an argument to all agents in the target's drop_actions list to which the pebble conforms.

There are three different modes of transport available for pick and drop. They are listed below with details of their use:

When or then the shape of the mouse cursor changes to reflect whether the current GUI component below the mouse accepts the pebble or not. Calling or on the source object allows you to customize the Accept- and Deny-Cursor respectively—used to represent a valid or invalid target respectively while the mouse pointer (pebble) is being moved around. The default Accept-Cursor is the standard mouse pointer. The default Deny-Cursor is a red circle with a diagonal line across it: the universal "not permitted" symbol.