Note: The notation used in the examples on this page will work for Microsoft Windows. Other platforms may require different command formats.

Suppose that you want to add an external command to EiffelStudio to Subversion's update command (update brings your working copy up-to-date with the repository). You can define a command with an appropriate name, say svn update, as shown below. 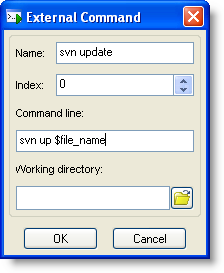 The command line: svn up $file_name invokes Subversion and executes the update command. The placeholder $file_name substitutes the name of the file associated with the class currently targeted in the editor pane. So if you were editing class MY_CLASS which exists in file my_class.e, then that file name would be used in the Subversion update command executed.

Once the command is defined, it will be accessible through EiffelStudio's Tools menu, either by selecting it explicitly or by using its associated keyboard short cut, Alt+0, in the case of this example. 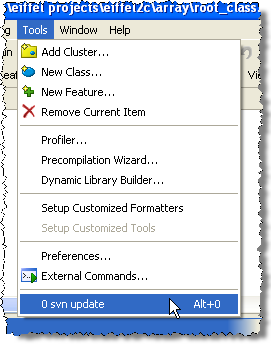 You can use this same technique to add external commands for other Subversion commands that require only a basic form. For example, to create a command that will add the file for the currently edited class to the repository, add a new external command with the command line: svn add $file_name

or, to revert local changes to the file associated with the class which is currently the target of the editor: svn revert $file_name

The option to confirm execution of a command

It's possible that in some cases, for example that of svn revert, you might want to have the command provide you with a chance to back out of the deal before the command actually executes. You can do this by adding a little more to the command line: 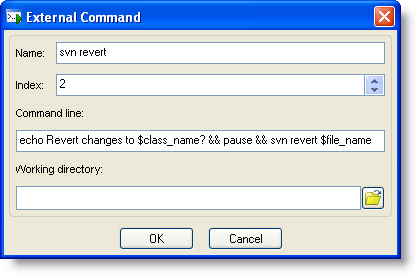 first asks for confirmation before executing the command.

When you execute this command you will see the confirmation prompt in EiffelStudio's Console tool:

If you are using the TortoiseSVN GUI client for Subversion on Microsoft Windows, you may prefer to have TortoiseSVN execute the Subversion commands for you from EiffelStudio. You can do this by starting tortoiseproc.exe, and providing the specifics for each command as shown in Appendix D of the TortoiseSVN documentation.

Some common Subversion command invocations are shown with their respective command lines below:

Back to Customizing EiffelStudio
Permanent link