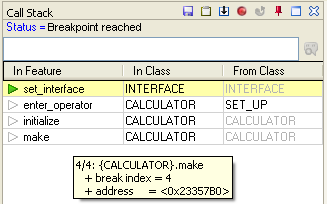 The call stack tool provides information, at a particular point during system execution, about the call stack of a system being executed under control of the debugger.

The call stack is composed of a list representing the call stack elements, in which the root procedure of the system is at the bottom of the list and the currently executing routine is at the top.

At the top of the list, one line of text gives the state of the debugged application, in this case "Status = Breakpoint reached". A second line describes the exception that caused the application to stop, if any. In the case shown above, execution stopped at a breakpoint, so no exception is shown on the second line. For more information concerning exceptions, see the supported exceptions. The button

is used to open the Exception dialog which show the exception details. For instance a call on Void target in a .NET system would popup : 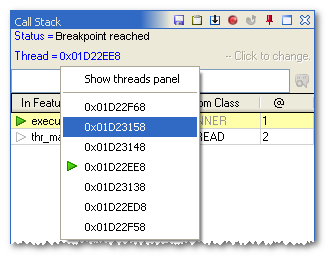 In the toolbar, the button

gives you the capability to save the call stack to a text file. The button

can be used to copy the call stack to the clipboard. The

button makes it possible to choose a desired depth for the call stack in the list (the default is to display the 100 top stack elements).