Over the course of several releases, Eiffel Software has introduced a number of options and settings which allow users of EiffelStudio and the Eiffel command line compiler to choose the appropriate level of forward progress and/or backward compatibility for a particular application.

This is a summary of the motivation behind and the meanings of the various compatibility options.

The table below shows project settings that, depending upon their values, can affect the compilation of Eiffel code produced under older standards. That is, certain values for some of these settings may cause older code to fail to compile due to non-compliance. However, other values may allow you to compile non-compliant code during a period in which you convert that code to the current Eiffel implementation.

Eiffel Software and the wheels of progress

The Eiffel analysis, design, and programming language has remained relatively static since its original specification in the mid-1980's. However, periodically it has become necessary to make certain changes in order to make certain language improvements and to enable new facilities. It is the policy of Eiffel Software, when such changes are made, to ensure that the changes have minimum impact upon existing software. For some changes, that means no impact at all, but for others it means that the new Eiffel is incompatible with the old Eiffel (the so-called "breaking changes" … those changes that break existing code). And that means that existing software will have to be changed to take advantage of the recent changes to Eiffel. Even so, Eiffel Software has been able to ease the transition from old to new by implementing certain compatibility options which allow existing software still to run as in previous versions during periods of transition.

The Eiffel programming language is standardized under the ISO and ECMA standardization organizations. So, it is not surprising that many of the changes that are implemented by Eiffel Software are driven by the work of the Eiffel standardization committee.

Still, the standard itself is a moving target, and there are always differences between what is in the current standard and what has been implemented by Eiffel Software. Also, only immediately after publication of the standard might there be complete agreement between the standard document itself and the perception of Eiffel by the standard committee. That is to say that a new version of the standard may be published once every few years, but the process of moving the language forward continues in the committee in the meantime.

The diagram below attempts to characterize the relationship among the various factors that define Eiffel. 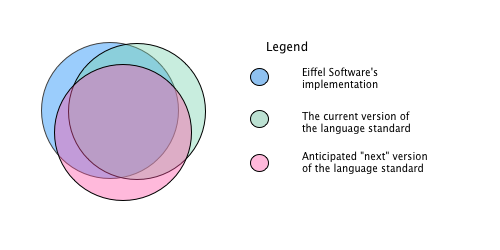 It is easy to see the overlapping areas. The centermost represents that part of Eiffel that is at once implemented by Eiffel Software, exists in the current published version of the standard, and is anticipated to remain in the standard for the next version.

The other areas represent Eiffel features that are supported by only one or a combination of two of these factors.

There are many different types of changes that can effect existing code. Here are some examples of these.

These "mode" options are selected when EiffelStudio is started up or when the command line Eiffel compiler is invoked. The following two mode options were introduced in version 6.3 on the eve of implementing void-safety as an integral feature of Eiffel. The mode options were intended to help developers deal with the changes to the Eiffel libraries for void-safety.

Implicit here is that there is also a "default" mode which is invoked when neither of compatibility nor experimental mode is used. Default mode assumes a "current" set of libraries.

These options are set in the EiffelStudio Project Settings dialog box.

The most important of these is the Syntax level variant setting. You can choose among a set of syntax level variants that let you control how the compiler views certain language changes. So, for example, if you are compiling classes that contain obsolete keywords, you would set the Syntax setting to the Obsolete syntax variant.

Bear in mind that the detail meanings of the various syntax variants may change from version to version. So, it's a good idea periodically to check the syntax level variant settings by version.

The tool makes the following updates to existing code: