One of the key ideas in SCOOP is to prohibit simultaneous access to shared memory. In order to reach this goal, the SCOOP model partitions the heap memory into regions.

Definition -- Region: A set of objects in the heap. The set of all regions in a program is a partition of the heap.

Every object in an Eiffel program belongs to exactly one region. A region is by itself sequential, meaning that there can only be one routine executed in one object. There can be multiple regions in a SCOOP program however. 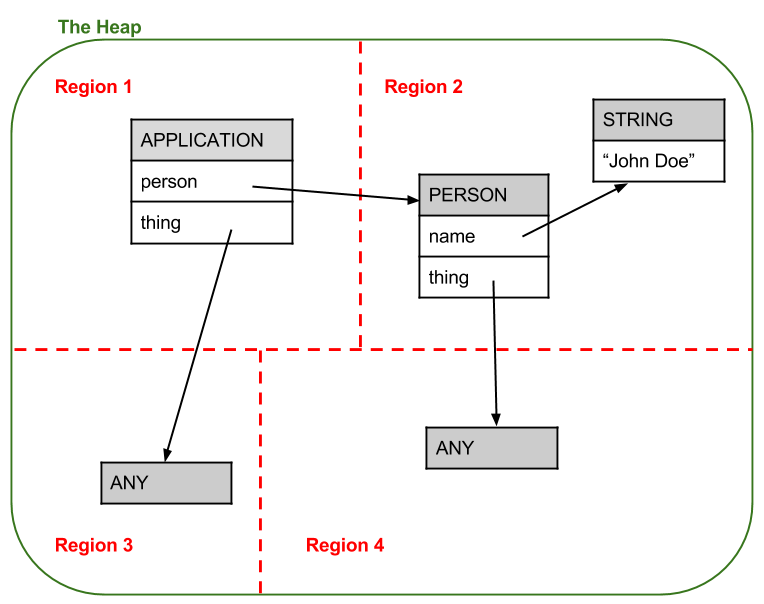 Info: SCOOP is classified as a message passing concurrency model, because there is no shared memory.

Note: A sequential program is a special case for a SCOOP program that has only one region.

A direct access from one region into another is not allowed. If one wishes to perform a command or a query in an object of a different region, a message has to be sent. You'll see how this can be done in chapter Separate Calls.

The simple trick of splitting the heap into several regions, where each region by itself is sequential, prevents one of the trickiest problems in concurrency: Data Races. In SCOOP you are guaranteed that a data race, meaning a read and write access to the same memory with nondeterministic ordering, can never happen.

In the SCOOP model, a processor is used as the engine for execution.

Definition -- Processor: An autonomous thread of control capable of sequential execution of instructions.

A processor is always attached to exactly one region, and is responsible to perform operations on all its objects. The term handler of an object is used to denote the processor attached to the region on which the object is placed.

As already mentioned earlier, a processor cannot access or perform operations on an object in a different region and has to send a message to the other handler instead.

Info: Processor is an abstract notion and does not mean the physical silicon chip which is present in every computer. In SCOOP we think of it as a thread of control capable of applying features to objects. In theory processors are not restricted to any particular type of hardware or software, for example they could correspond to threads, processes, hardware processors, or machines in a network. Currently however a SCOOP processor is implemented as a thread.

To support the concept of regions in a program text, SCOOP extends the type system by introducing a single new keyword: separate.

The separate keyword is used to annotate a reference and means that the object attached to it may be in a different region.

Definition -- Separate type: A type which has been declared including the keyword separate.

If an entity uses the keyword separate in its declaration, such as:

it indicates that the handler of my_x may be different than the handler of Current. This in turn means that it is forbidden to access and modify my_x directly. To perform any operation on my_x, a message should be sent to the other handler.

Note that the SCOOP type system allows to attach an object to a separate reference, even if it is actually in the same region as Current. But it is not possible the other way around: An object in a different region must always be of a separate type. This is reflected in the type checker, which treats a regular type A as a subtype of the separate type separate A.

In the image above, the three references that cross a processor boundary must be declared separate. The single reference in Region 2, which stays in the same region, can be of a non-separate type.

In order to turn a sequential program into a concurrent program, one has to create new regions and put objects into them. The means to achieve this is the creation instruction on an entity whose type is separate.

The instruction create my_x.make does a lot of things at the same time:

With this new knowledge we can create a small program that generates the object and region graph shown above: