Text criterion uses a text modifier, two normal modifiers (one to specify matching strategy and the other to specify case sensitivity) to perform text pattern matching. Criterion such as name_is and text_is are text criteria.

The syntax for name_is is:

The match_strategy modifier decides how criterion text "pattern" is matched, and can choose from one of the following four values:

The case_sensitive modifier can be True or False, it indicates if pattern matching is case sensitive or not.

In the following two figures, name_is criterion is shown. That criterion will select all classes whose name starts with a letter A (using regular expression rules) case-insensitively. 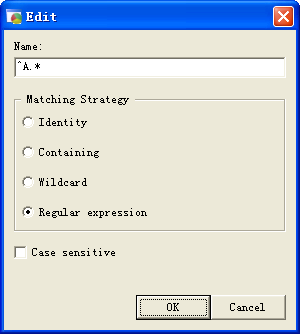 A path criterion uses a text modifier as path to test if a candidate class is located in that path. There are two path criteria, namely, path_is and path_in.

The following figure shows a path criterion used to find classes which locate in "kernel" folder: 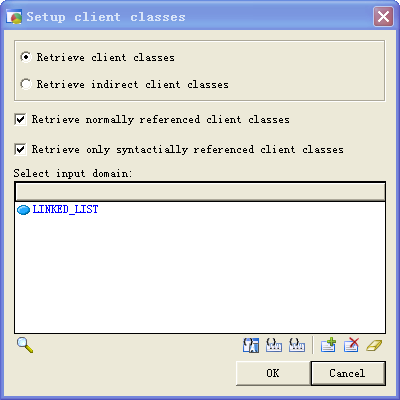 The following figure shows the use of value_of_metric_is criterion, where a class basic metric is defined to find classes whose lines of code is over 1000:

The following figure shows the result of the above metric:

All other criteria except for those described above are called normal criteria.

is_library - test if a candidate group is a library

is_deferred - test if a candidate class or feature is deferred

There are three criterion connectors: and, or, not. They are self-explanatory. Just a simple example, see the following figure:

Back to Definitions
Permanent link