Let us get back to EiffelStudio. Before studying the documentation generation we saw how to display properties of classes. It's also interesting to explore the properties of features.

There are two tools with similar sounding names that we will use to explore features:

(note that this is the plural "Features" versus the singular "Feature").

If the tab for the Features tool is not visible, bring it back by following the menu path:View --> Tools --> Features

While we are at it, let's get make the Feature tool visible as well. Click on the tab on the lower pane that's labeled

. As with the Features tool, if the Feature tab is missing, you can use the menu path to restore it.

One more thing, and we'll look at some features. If you restarted EiffelStudio since you worked through the Viewing Classes section, you may have to select Link Context Tool again from the View menu.

Targeting to a feature

The list of features, organized by feature clauses, appears in the Features tool: The class only has a few immediate features because most of its interesting features are inherited. Make sure the Editor tool is tall enough (as on the above figure) and click the feature forth, the last one, in the Feature Tree on the left. This makes the feature the Editor tool's current target, and scrolls the text to its declaration: 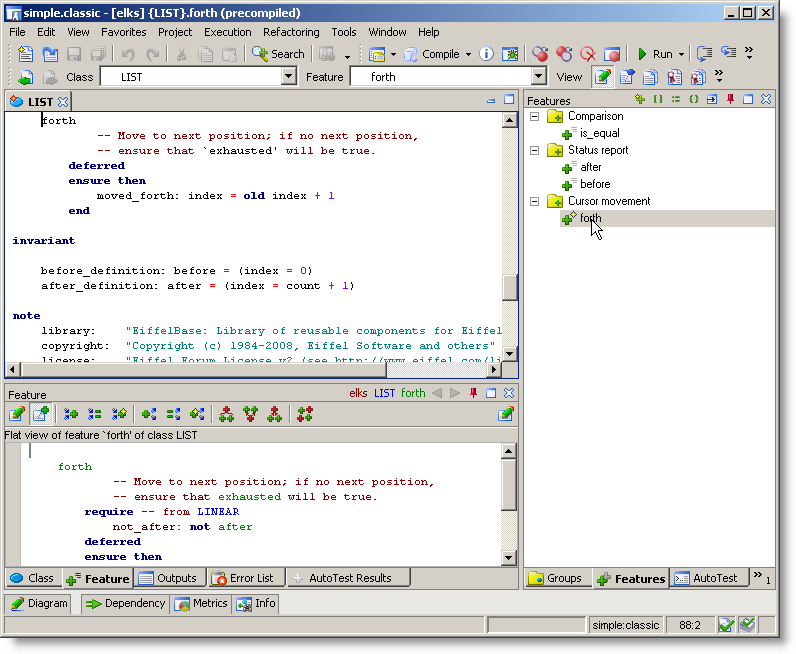 Now let's look at the views of the feature forth provided in the Feature tool.

A view of forth is already visible in the Feature tool. By default, it is the Flat view.

Flat is just one of the available Feature Views, shown by the buttons on the toolbar of the Feature tool.

You can mouse-over the different buttons to see the views they represent.

Who calls this feature?

To the right of Flat is Callers. Try it now by clicking the corresponding button. You may have to scroll down some in the display to see the series of entries show in the image below; This view shows all the places in the system that call the routine, or one of its redefinitions. Such information can be invaluable for debugging in particular. The successive paragraphs correspond to the various versions of forth in class LIST, its ancestors and its descendants. Reading from the top we'll examine a few entries:


The following five view buttons are similar except that they let you specify what kind of callers you are looking for, or what is being called by the currently selected feature. Feel free to explore these views.

What happens to my feature through the inheritance hierarchy?

After the caller/callee views, the next view button is Implementers.

This is a very useful view, showing all the ancestors and descendants of LIST that provide a separate version of forth, including the original introduction of this feature in LINEAR and subsequent redeclarations (redefinitions or effectings). The mention (version from) signals the version applicable to the current class, here LIST.

Since all class and feature names on these views are hyperlinks, you can display any of the listed versions in a new Development Window by control-right-clicking it (we will see shortly how to display it in the same tool). Right-click on the feature name forth on the line that reads MULTI_ARRAY_LIST forth. This brings up a context menu and chose Show --> Text. The tool is now targeted to the routine forth from MULTI_ARRAY_LIST, so that you can see the implementation of the routine in that class.

The format is self-explanatory: for each ancestor of MULTI_ARRAY_LIST that has a version of MULTI_ARRAY_LIST 's forth feature, it indicates the name of that feature -- which could be something else than forth as a result of renaming, although here this happens only in descendants, not ancestors -- and the version of the feature applicable to the given class.

In the case of feature merging (combining several features inherited from different parents, in conformance with the rules of the language) there could be more than one history branch, in this case each branch is labeled Branch #X.

The next button, Descendant versions, similarly tells you all that happens to a feature in the descendants of the current class.

Who has the same name?

The last button, Homonyms, displays all the features of the system which, related or not to the current feature by redeclaration, have the same name. You can then explore any such feature to see if the relationship is more than casual.

In any system or library that takes advantage of inheritance and its associated mechanisms -- renaming, redefinition, effecting, undefinition, multiple and repeated inheritance, polymorphism, dynamic binding -- the feature browsing facilities that we have just explored are invaluable to track what happens to features. What makes them even more precious is their connection with the rest of the browsing and documentation capabilities, especially the pick-and-drop which we will now study.

Back to Tutorials
Permanent link