The Evaluation (or Watch) tool displays a list of expressions and their values (provided that those values can be obtained). 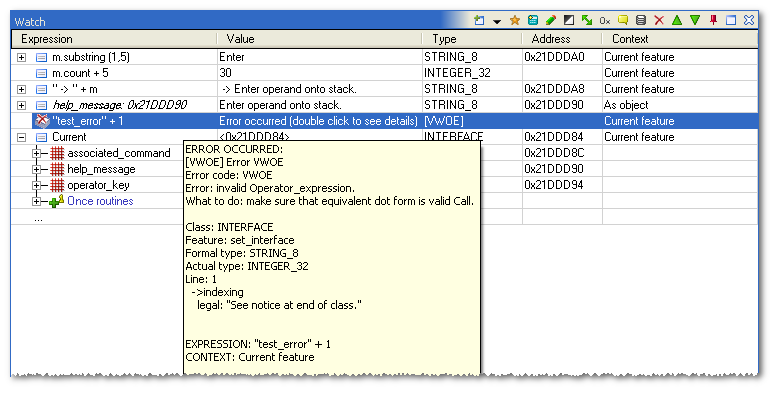 In the image above, you can see various expressions. Look at the one on the fourth line. This is an object that has been dropped on to the Evaluation tool, and the tool displayed it as itself, as shown by "As object" in the Context column, and by the italic style. The user can name the dropped object by editing the value in the Expression column for the expression. This can be useful to help you remember the origin of the value.

The expression in the fifth row has an error, the icon is different, and the Value shows there is an error, double click on it for more details.

Tip: If the expression returns a non-Void (and non-basic type) object, then the corresponding row in the list is pickable. The object can be dropped, for example, on the Evaluation tool to inspect it or to keep the object visible while stepping through system execution.

Tip: holding the mouse pointer over the expression's cell will pop up a tooltip with details on the pointed expression

On top of the list, four buttons can be found.

Tip: Dropping an object onto this list lets you define quickly an expression whose context is the dropped object. This avoids having to type object addresses manually.
If you hold the CTRL key while dropping, you will add the dropped object as itself.

Back to Expression evaluation
Permanent link