When an exception occurs (for instance, an assertion violation), the object tool will also display the exception information:

Note: A specific case for .NET systems: When the system is stopped, the first item of the local view displays the module name for the feature at which execution stopped.

All objects can be expanded to see the values of their attributes. They are also pickable, so that it is possible to drop them onto the Object tool, an expression evaluator tool (also know as Watch tool), or an editor.

It is also possible to use the set slice size command with SPECIAL objects or NATIVE_ARRAY (.NET) objects.

Tip: The tool's layout can be customized to have 2 side-by-side "left" and "right" grids holding the various information. This can be done using the button (

) from the toolbar which open the objects tool menu and then select "Edit Layout". Then you can use the tool layout editor as shown below to adjust which information you want displayed in each of the two sides. 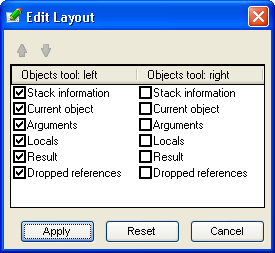 Note: By default, the object tool displays the full generating type for object, but this can be changed for speed concern in the preferences . The same way, through the preferences , the user can enable or disable the evaluation of the Debug Output feature.

Note: When a row displays a pink background, this indicates the value has changed as a result of the previous step.

Tip: The expression evaluator tools (also known as Watch tools) provide many of the same features as the object tool along with even more functionality.