EiffelBuild supports the use of constants, permitting you to define a particular value and use it comprehensively throughout your system. If a constant is in use, any changes are reflected immediately in all clients, providing a quick way of globally changing object properties. The Eiffel code generated by EiffelBuild, generates all constants as actual Eiffel constants for use in your system.

The following constant types are supported by EiffelBuild:

Modification to all constant types is performed from the constants dialog, accessible from the main toolbar via the

button. The constants dialog has the following appearance: 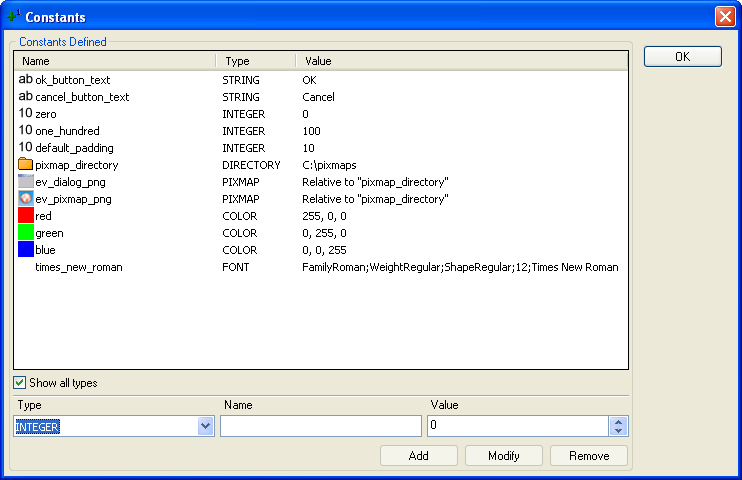 The screenshot above, shows the constants dialog displayed for a project containing twelve constants, a few of each available type. Each of the constants in the project are displayed in the multi column list occupying most of the dialog.

To add a new constant to your project, select the type of the constant that you wish to add from the "Type" combo box. Depending on the type of constant selected, the remaining fields, and associated buttons will be modified appropriately, and the steps required to add the constant differ:

Note: After adding a new constant, it is immediately displayed with all constants in the dialog.

To modify a constant that already exists, select the constant in the multi column list, and depending on the type of the constant, perform the following:

To remove a constant from the project, select it in the multi column list, and select the "Remove" button, or press the delete key. If the constant is not in use within the system, it will be removed, otherwise the following dialog is displayed:

As objects are reliant on the constant you are removing, you must confirm that you really wish to remove it from the system. If you select "OK", the constant is removed, and the object property relying on that constant is converted to a manifest value. For example, if you are using an Integer constant with a value of 100, and you remove the constant, the property no longer references the constant, but is set explicitly to 100.

Note: You may sort the constants displayed in the dialog, by clicking the associated column header.

A pixmap constant is a representation of a pixmap image, and two types are available:

Where pixmap_location is the name of the Directory constant to which the pixmap is relative. 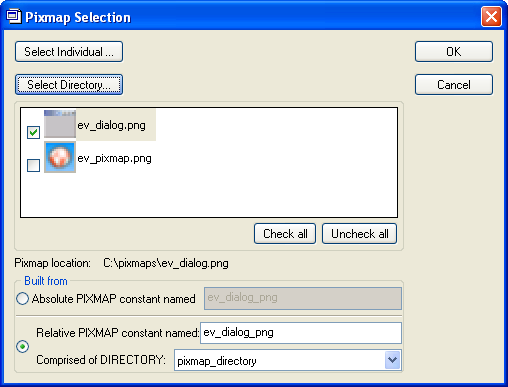 An individual pixmap may be selected, or a whole directory of pixmaps may be selected from this dialog for addition. In the screenshot above, a directory containing two pixmaps was selected. The "Build from" option at the bottom of the dialog permits you to select if you wish to add an absolute or relative pixmap, and if multiple pixmaps are being added, the currently selected pixmap from the list above is active. The relative "DIRECTORY" for relative pixmaps is filled in automatically if EiffelBuild finds a directory constant in the system that matches the path chosen. If not, you may enter a name in this field to create a new directory matching the required path. If you do not enter a directory name for one or more relative pixmaps, upon closing the dialog, you will be prompted to enter a name for a directory constant used for these pixmaps.

Note: If you are selecting new pixmaps, and they appear in the dialog as unchecked, it means that an equivalent pixmap already exists in the project.

The generation of an EiffelBuild project creates two constants classes, an interface class and an implementation class, named to match the setting from the project settings . For example, if you have specified the name "constants" for the constants, two classes are generated, and the implementation, .

By default, all constant values are hard coded into the implementation class, but it is possible to set these to be loaded from an external file upon execution of the generated system. To do this, the "Load constants from file" setting of the project settings must be checked, which causes a file "constants.txt" to be generated, containing the definitions of all Integer and String constant values. As the system is executed, the values of these constants are loaded from the file, and by providing different versions of the file, at the time of deployment, multiple languages may be accounted for in your generated system.

Constants may be associated to properties of your objects via an object editor targeted to that object . The

button denotes the use of a constant value. For more information regarding using constants, in object editors , see object editor .

When an EiffelBuild project is generated, all constants are added to a class, inherited by each window class. There is an "_IMP" and interface versions of these classes as with each window. For more information regarding the generation of constants, see code generation .

Note: To modify pixmap constants based on the current installation of an EiffelBuild generated interface, simply redefine the Directory constant used to access the pixmaps within the interface constants class (not "_IMP"), which is not re-generated if it already exists.

Back to EiffelBuild Reference
Permanent link