To generate Eiffel code representing your system, select Generate code from the Project menu or click

on the main toolbar . The length of time taken to generate your code is dependent on the speed of the system you are running, and the size of your interface, but typically takes a couple of seconds. A progress bar is displayed during the generation of your system.

The code will be generated according to the options you selected in the project settings .

The generation of an EiffelBuild project causes the following files to be generated:

For each "top level" widget class in the system (contained in the widget selector ), the following class hierarchy is generated: 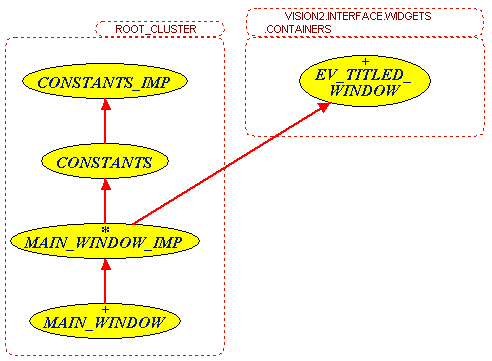 If the "generate as client" option is selected for a particular object (changeable from the object editor , only for objects contained in the widget selector ), a client supplier relationship exists between the generated widget class and the EiffelVision widget, as illustrated below: 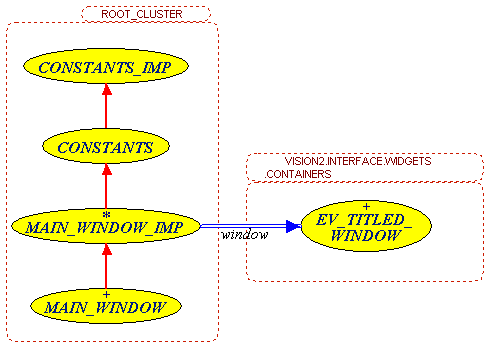 Note: All other diagrams on this page show only the non client version of the settings, where the generated widget inherits from the EiffelVision class.

If build type is selected as Project in the project settings , then all the classes listed above in "Generated classes" are generated, along with the following:

The generated files comprise a complete project with a configuration file enabling you to compile and execute the generated system as is. The following diagram illustrates the hierarchy of the generated project, showing only the root window of the project: 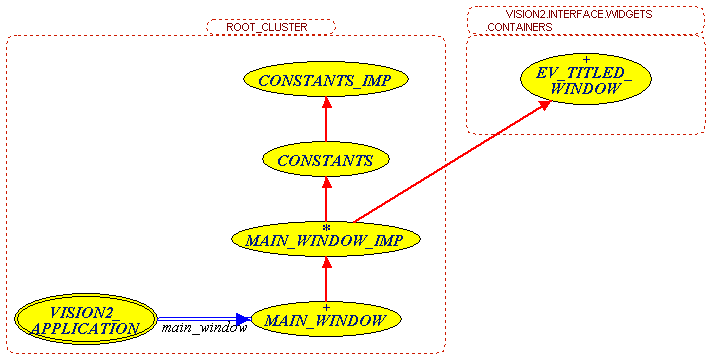 Using this mechanism, you can generate your initial system using EiffelBuild, and implement any event features that have been generated (in the interface) by EiffelBuild. If you then decide that you wish to modify the look and the feel of the interface, you can return to EiffelBuild, make the necessary adjustments and then re-generate the system.

Note: When returning to EiffelBuild to modify the interface, if you delete or rename controls, then it is quite possible that you will break your existing code. Care should be taken with all changes of this type.

Back to EiffelBuild Reference
Permanent link