As a rule, in EiffelStudio, class text can only be edited in the Editing tool, and then only when the Basic Text view is selected. The Contract Editing tool is an exception to this.

The Contract Editor tool gives you the ability to examine and edit class contracts in a context that is isolated from the full class text. In other words, when you use the Contract Editor tool, you see and edit the contracts without having to work around other elements of the software text such as implementation. For routines, you can edit pre- and postconditions, and for classes, you can edit class invariants. The tool provides views of inherited contracts as well as immediate ones.

Also included is a set of templates for creating common assertion patterns. By using these templates whenever possible, you add consistency to your class text.

The Contract Editor tool can be helpful during analysis and design phases of development, when class specification is a primary concern.

If the Contract Editor tool is not currently visible, it can be made visible by following the menu path:

Once visible, the tool can be docked to an appropriate location, if desired.

This applies to multi-line assertion clauses, too, as shown below.

The selected clause can be moved up or down relative to the other clauses by using the up and down arrows in the toolbar.

To make changes to the text of the currently selected assertion clause, click the Edit button (

) on the toolbar, or just double-click the selected clause. The clause appears in the Edit Contract dialog box.

You can edit the tag for your assertion clause and the assertion itself.

Assertion clause tags must be valid identifiers. The Contract Editor tool will check your input as you type and alert you if entered a character string that would not be a valid identifier. The tag is optional, so you can leave it empty if you wish.

At this point, the changes have not been saved to the class text. To save the changes click the Save icon (

) on the toolbar. The button provides two methods of creation "Custom" and "From Template". 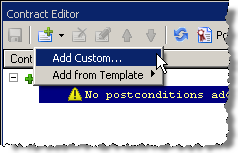 Choosing "Add Custom..." produces a freeform dialog, much like the editing dialog show earlier in which you can edit an assertion clause from scratch:

Part of the specification of this routine might be a precondition that states that the argument must be attached (i.e., not Void), and not the empty string. This precondition can be added to the feature by adding two assertion clauses from templates. To specify that a_string must be attached, you would first choose the template "Attached Contract" which provides this dialog: 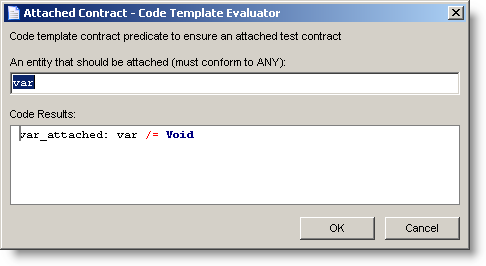 This template focuses on the fact that some entity (expressed as var in the template) must be the object of an assertion clause that guarantees that the entity is attached. To have the template create such a clause for the argument a_string shown in the routine above, just replace var with a_string in the top text box of the dialog. The resulting code is updated automatically: 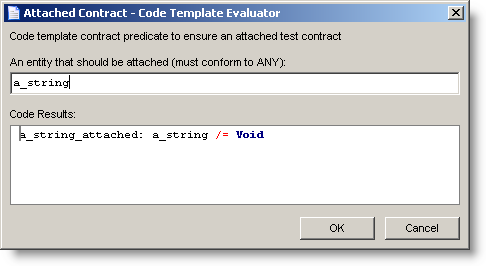 Adding a clause to specify that a_string must not be empty is done similarly, by selecting the "Not is empty" template. After adding these two precondition clauses, the routine now looks like this: