The layout constructor provides a view of the objects you have defined in your system, in which the objects may be manipulated. The root node of the tree is the object currently selected within the widget selector and objects may be added/moved within the displayed widget structure by picking and dropping the objects as required. For example, in the screenshot below, you could add another list to the vertical box, by picking a list from the type selector and dropping it on the vertical box object. 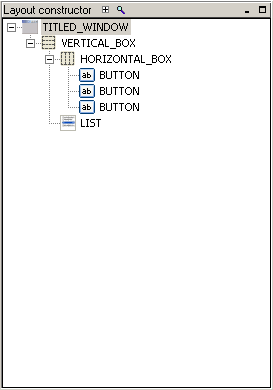 Each item in the tree represents one object. The screenshot above represents the following EiffelVision 2 interface definition - An EV_TITLED_WINDOW containing one child, of type EV_VERTICAL_BOX. Within the vertical box there is an EV_HORIZONTAL_BOX and an EV_LIST. The list is empty, but the horizontal box contains three different objects of type EV_BUTTON.

Note: The widget displayed as the root of the Layout Constructor is the currently selected object in the Widget Selector . To edit the contents of a different widget, select the widget you wish to manipulate from the widget selector .

The information displayed, only shows you the structure of the objects , and although it gives you an indication of the final appearance of the interface you are building, you cannot see the details of the interface. i.e. color, sizes, tool tips etc. To view an accurate representation of the widget structure you are building, show the Layout window .

All objects displayed in the Layout Constructure are pickable , so can be easily manipulated, e.g. deleted or reparented .

Note: If the object in the tree has the Name property set, then the text corresponds to the name, otherwise, the text is the type of the object .

If you have just started a new project, then the layout constructor will only contain one tree item, TITLED_WINDOW.

The currently selected object within the Layout Constructor is automatically targetted to the docked object editor which is situated to the right hand side of the main EiffelBuild Window. This enables you to quickly and easily edit the properties of the selected object. Note that Ctrl-right clicking on an object in the Layout Constructor displays a floating object editor targeted to that object.

To Expand all of the items displayed in the layout constructor, select Expand layout tree from the View menu, or select the small cross icon displayed at the top of the tool.

Similarly, if you wish to collapse all of the items in the layout constructor, select Collapse layout tree from the View menu.

Objects that are instances of other objects are displayed as locked objects within the Layout Constructor as illustrated below: 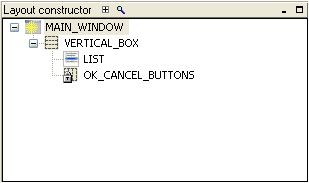 The object of type OK_CANCEL_BUTTONS is a locked instance of another object as illustrated by the locked icon displayed on top of it's type icon. As a locked object is simply an instance of another object, its internal structure may not be manipulated directly within the Layout Constructor. To change the structure of a locked object, you must directly change the object of which it is an instance. To add a locked object to your interface, simply pick the object that you wish to re-use from the widget selector and drop it into the desired parent object within the Layout Constructor. In this case, the instance of the OK_CANCEL_BUTTONS object is actually comprised of a number of widgets which may only be modified through manipulation of the original OK_CANCEL_BUTTONS_OBJECT. Changes made to this original object are then applied to all instances within your interface structures.